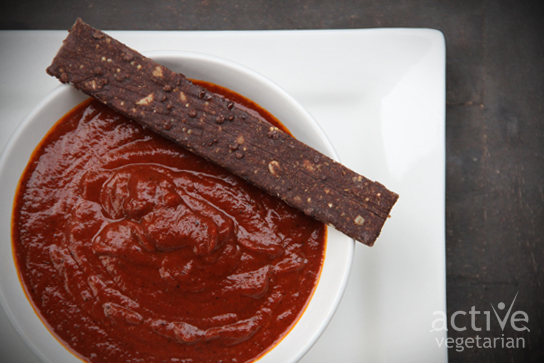 This soup is so simple. A lot of people like to add carrots and potatoes but I find that the addition of those items tends to take away from the roasted pepper flavor.

I start off by roasting some large red bell peppers. You may wonder why I’m a crazy person and roast my own peppers instead of taking the easier route and just buying them in a jar, and the answer is simply because the flavor is just so much better when you do it yourself. Plus, you are getting much healthier and nutritious final product 😉

I find that the simplest method is to set them over a gas burner until all sides are black, but if you don’t have a gas stove, you can just stick them under the broiler to achieve the same results. Both methods work, the broiler just takes a little bit longer.

After the peppers are completely charred, you throw them all in a big bowl, cover it with plastic wrap and let them steam for about twenty minutes

Ok, so the next step is to peel and seed each one and then throw them all into the blender. Don’t fret if there are still black flecks on the peppers, this makes for wonderful flavor and looks really pretty in the finished product.

Here we go with the step by step recipe:

With gas burner: place peppers over flame and char all sides of the pepper, there should be no red showing at all. After charring is complete, transfer peppers to a bowl and cover with plastic wrap. Let set for 15-20 minutes. Remove skin, ribs, and seeds from peppers.

In the broiler: Place in the broiler and char on all sides turning as you go. After charring is complete transfer peppers to a bowl and cover with plastic wrap. Let set for 15-20 minutes. Remove skin, ribs, and seeds from peppers.

While your peppers are cooling